Home » Behind the Collapse of FTX and SBF: Traditional Finance vs. Crypto
Mining

Behind the Collapse of FTX and SBF: Traditional Finance vs. Crypto People lost their last faith in the former billionaire when SBF announced FTX and 130 affiliates filed for bankruptcy protection. Meanwhile, people inside and outside the cryptocurrency community began to criticize the lack of transparency in the industry. That being said, can SBF and his FTX & Alameda Research really represent the crypto industry as a whole and blame crypto for the fall in FTX?

Nothing new on Wall Street

Jesse Livermore was once considered the greatest trader of all time.In his biography entitled Memories of a securities companyLivermore, one of the bestsellers on investing, describes his first impressions on Wall Street. Speculation is as old as hills, so it can’t be. What is happening in the stock market today has happened before and will happen again. ” History has repeatedly proved this to be true. What’s interesting is that when his Livermore, one of the richest traders in the world at the time, committed suicide, he had more debt than he had.

What happened with FTX is nothing new on Wall Street. For example, Lehman Brothers, with $613 billion in debt, also sought a bailout from many institutional investors, but Wall Street executives rejected the request after examining the accounts of the legendary investment bank. Did. Ultimately, Lehman Brothers had no choice but to file for bankruptcy protection.

The collapse of Lehman Brothers is familiar. Founded by the “genius trader” SBF, FTX and Alameda have at least billions of dollars in debt. After hearing reports revealing problems with Alameda’s balance sheet, SBF tweeted that the company was healthy but had begun seeking bailouts from institutional investors and undisclosed competitors. Despite these efforts, the investor ultimately had to face his FTX filing for bankruptcy protection.

After the Luna meltdown, many reports suggested that FTX provided assistance to a number of institutions hurt by the incident, but many acquisitions never actually took place. The man was lobbying US regulators when he portrayed SBF as the savior of cryptocurrencies. A conceivable digital asset industry standard.

A draft of the document was opposed by many crypto practitioners after its release because it considers freezing funds on-chain to be normal practice. Additionally, the draft suggests that DeFi platforms must register as broker-dealers, and also advocates his KYC on DeFi. FTX is an iconic CEX that makes people question the motives behind the attack on DeFi, which is why many call his SBF a hypocrite and that he wants to destroy the crypto industry. It’s also the reason I believe.

After FTX filed for bankruptcy, US Congressman Tom Emer tweeted: We are investigating this. The tweet reveals why SBF has frequently reached out to regulators. 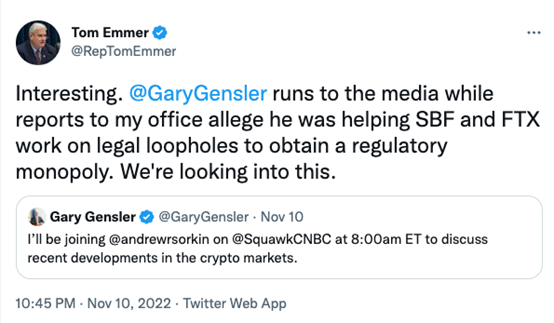 Clearly, the image of the Messiah constructed by the media is not true. In fact, SBF never claimed to be a crypto-believer. When he joined the industry, he didn’t really understand what crypto was.What motivated SBF to venture into crypto was that the BTC price difference between the US and Japan gave him arbitrage profits. When asked in an interview with Forbes if he would leave the industry if he found a way to make more money, such as trading orange juice futures, he didn’t hesitate. “Yes, I will.”

The ultimate solution for crypto

Judging by FTX’s ultimate collapse, crypto is not the best choice for SBF. Under his leadership, FTX was the market maker’s judge for games in which Alameda was a player. Apparently, the former Wall Street genius saw crypto as a way to accumulate wealth through speculation, while ignoring crypto’s principles of decentralization and transparency.

Cryptocurrencies advocate equality for all, which is the exact opposite of Wall Street’s tenets. A longtime believer in crypto assets and blockchain technology, CoinEx has always prioritized technology and products while striving for transparency, ease of use and reliability. He is also one of the first crypto exchanges to process all withdrawals in time and to not misuse user assets. Moreover, always aiming for ease of use, CoinEx has worked to remove the constraints of traditional finance by providing user-friendly crypto products and services beyond language barriers and geographical restrictions. rice field. The exchange aims to facilitate cryptocurrency trading by serving more retail users who plan to trade cryptocurrencies around the world.

As one of the leading CEXes, CoinEx has worked to drive crypto advances rather than limiting itself to its own interests. Mining pools, DEXs, wallets, and public chains are all integral parts of the crypto ecosystem. CoinEx’s parent company, ViaBTC Group, offers a wide range of services across multiple sectors, including mining pools, decentralized wallets, public chains, and capital investments. In addition, ViaBTC will provide technical and funding support to many DeFi and NFT projects, including DEX, to meet the demands of various users, ensure their assets are protected, and create a joint partnership for all players in the crypto industry. Promote progress.

FTX’s drop does not represent a cryptocurrency failure. Sure, it’s one of the iconic crypto firms built by traditional financial practitioners, but this isn’t the first time the Wall Street elite has failed, nor will it be the last. If we still want to “conquer” cryptocurrencies, the traditional banking model of fractional reserves and exploitation of user funds will no longer work.

The FTX incident showed that the crypto community still has a long way to go. Nevertheless, CoinEx believes blockchain and crypto technology will revolutionize finance. The drop in FTX was also a reminder that the crypto space should be an elite group of Wall Street, and that crypto companies can only achieve true success by focusing on public demand. For many other crypto enthusiasts, the best crypto solution removes financial barriers, bridges the information gap between retail and institutional investors, and allows everyone to enjoy accessible and transparent crypto services. It is to